US Customs and Border Protection

When within range and angle, the gunners will fire on the boat automatically.

For the first time, a suspected smuggling boat off Southern California has been fired on by a U.S. Customs and Border Protection aircraft, officials said.

The incident, which was revealed Monday, took place off Santa Catalina Island when a panga boat believed to be carrying bales of marijuana was spotted traveling north Saturday night.

The panga was spotted by a Coast Guard C-130 aircraft while on patrol about 24 miles off the La Jolla coast.

The panga operators refused to stop and began to throw the bales overboard, officials said.

After the Blackhawk fired several warning shots across the bow of the panga, it stopped, said Mitch Pribble, director of air operations for Customs and Border Protection in San Diego. It was the first time warning shots have ever been used from an aircraft, he said.

“You always want a vessel to stop when they are first directed to do so,” Pribble said. “However, when a suspected criminal chooses to flee, the ability to fire those warning shots gives us another option.”

The goal, he said, is to stop the smugglers before they “become a greater danger to law enforcement personnel, innocent civilians on the water, and themselves.”

Three men were taken into custody and turned over to the Border Patrol. The panga was seized.

Depart Customs area at the Harbor and follow the waypoints to intercept speeding panga. Use your Ground Mapping Radar/10 NM range to locate the reported boat. Gunners will fire warning shots. Return to harbor and land. 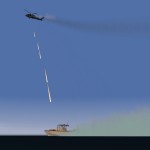