It is imperative that the F-4 Phantoms capable of carrying anti-shipping cruise missiles be destroyed. They are based at Bandar Abbas close to the Strait. Aircraft are soft, easily damaged targets and they are reported to be parked in the open. Lead your flight from the USS Vinson to Bandar Abbas at programmed course. Nearing the target, turn on your ECM. If fire upon, use chaff when appropriate but maneuver is your best bet. Select the bombs over ten miles out and let them acquire the target you have selected. Have your wingman also drop. Down low, flares are a more appropriate defense. Do not get in range of the AAA. You can expect the IRIAF to respond. If so, know their position. Use your radar and your map (M for map). You can select an appropriate A2A radar and a missile that matches your range. Be aggressive. When clear, go back to the ship and trap.

Nearing the Vinson, type Y until you acquire an “aircraft” named BALL. That’s the ball. You can toggle your view onto it for realism but land with it off and the cockpit off also. We teach how to trap in Flight School. 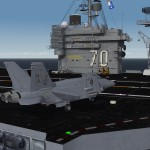 USS Vinson in Strait of Hormuz 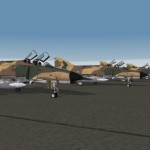