Acquire and lock onto the target. Maneuver into optimum firing parameters. Know your firing ranges. Use the gun carefully.

American strike fighters are hitting Dezful. If you are careful and avoid detection, you should be able to close on their rear quarter and attack them. They are aggressive and well-trained so no mistake is survivable. If you can force them to jettison their bombs, you have won. Do not engage indefinitely. You do not have the fuel to fight at full after burner for very long. But, you can turn with them and run with them. Your missiles are good but your radar is not as good. So they will get the first shot if they detect you. If they shoot, do not merely deploy decoys. Jink!

Depart Bahregan Air Base and follow programmed course to Dezful Vahdati to intercept US fighters bombing there. You may be outnumbered so to not enter into a turning fight if you have not scattered the formation and, possibly, shot down some. Direct your wingman to attack also. When finished, return to Bahregan, land and taxi to parking. 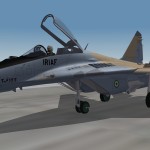 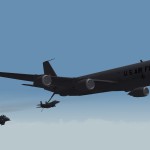 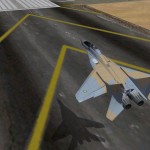