Acquire and select target. Point gunsight at target and when within range for each missile, shoot. Be careful of head on passes as they have guns and will hit you.

Iran has as many as 50 AH-1J Cobras which should be expected to appear in battle against ground targets. They are mobile, lethal and hard to locate. They must be stopped. You are armed for air to air combat. Depart the Makin Island and lead your flight to the landing zone on the beach. You will close on them very fast which will negate the missile’s ability to maneuver in time. Also, do not assume they cannot defend themselves. When you have destroyed the attacking helicopters, return to the “Island” and land. 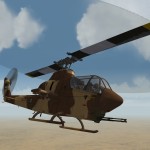