US Navy ships in the Strait of Hormuz and the Arabian Sea.

Iran will still have teeth on Day 5 and fighters to carry anti-shipping missiles. Depart from Dezful Vahdahti Airport and proceed along programmed course in search of US Navy ships. You have a long mission so you will need a pre-strike tanker. Intercept Zebra tanker and fill up. If you cannot find the tanker, you will need to land before reaching home base.

Watch your map and surface radar for orientation and to find ships. Also watch for American fighters. As you approach the Strait, where the San Diego  was reported to be, beware of US cruisers and destroyers. Their missiles are deadly if you get within range. They are less effective if you are flying at low altitude until you need to gain launch parameters and pull up.

Aircraft Animations: Refer to the Pre-Flight screen before pushing the FLY button. 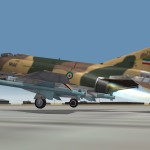 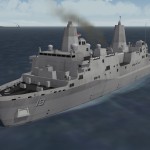